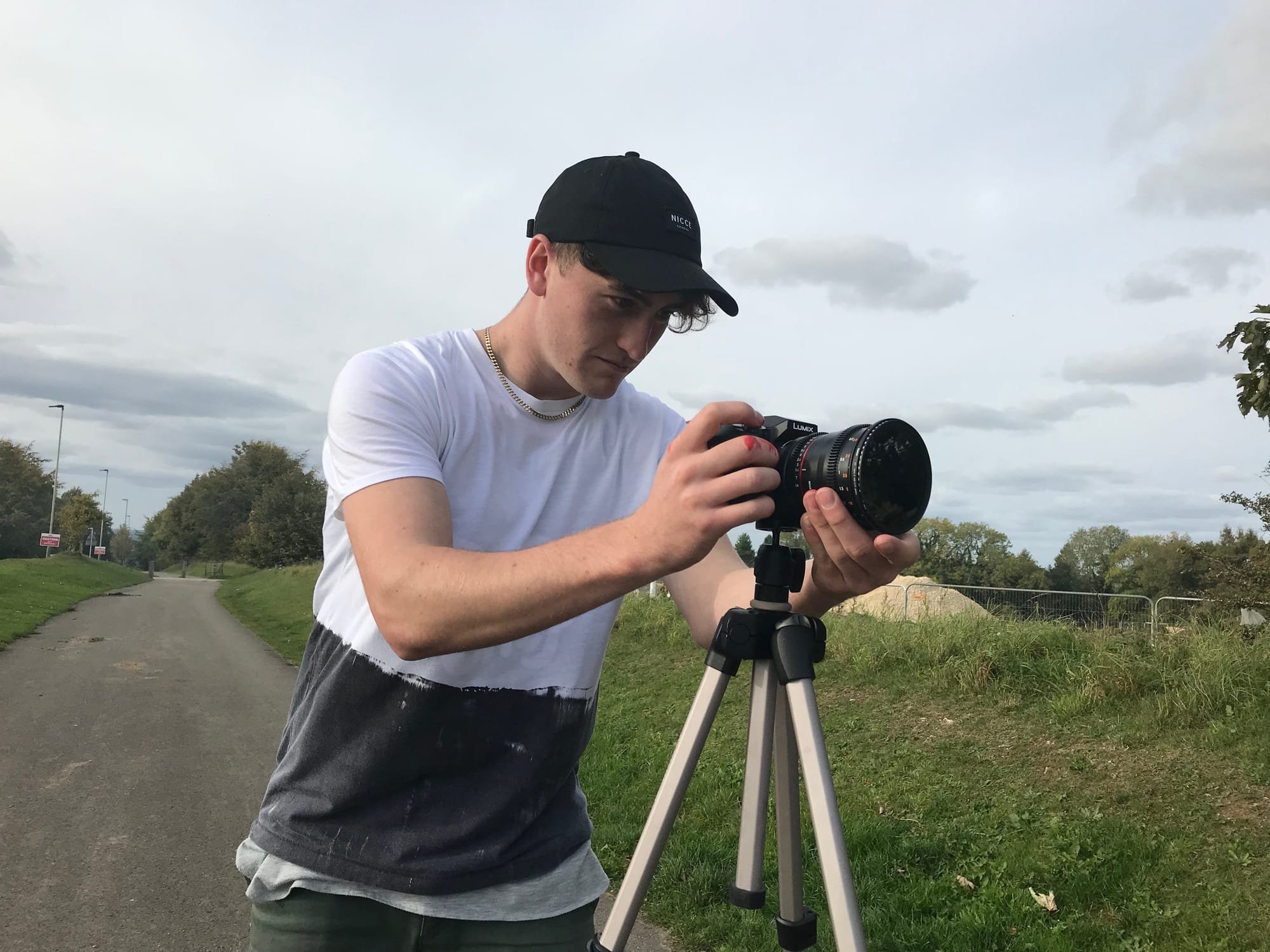 My Role on set varied as the team expanded over the weeks, I originally joined as a runner and helped in any way I could, this being the first feature film I have worked on. Whilst the crew was waiting on the head of Sound to fly over I took the challenge of covering sound and boom operation.  With very little experience on using the boom, the Director gave me hands on experience with a 1-2-1 on how to set up the Tascam and hold the Boom pole correctly. During takes, he was patient with me when it came to getting my positioning correct.

After the first couple of days, the head of Sound came in with a Boom Operator and I then joined the camera team helping out with lighting. The DP would go over plans with me and show me how to set up lights, like a HMI to replicate sun light. The camera team informed me on electrical currents when using 2 HMIs through the same house. When I questioned the DP on Negative fill whilst shooting an interior take I was told it helps add definitions and dimensions on what could be a flat looking shot. He also taught me about a ¾ lighting setup. I learnt so many invaluable things from such a friendly crew that’s there is too much to list.

In the last week, the AD showed me the discipline required when using the clapper board, reading it off accurately, holding it straight and labelling it correctly.

A great crew with some lovely people on board. It’s always hard when you enter a film set meeting a large amount of people and remembering names but as time goes on and you’ve been pushed through the long days, comradery starts to build and it makes helping each other out worthwhile.  You know they would do the same for you and you find enjoyment in helping the process of making a film.

Personally, my time on set was a steep learning curve getting exposed to all departments and all the film equipment and learning how to deploy certain equipment and learning about onset etiquette. This experience has been great, not just allowing me to do some work but also soak in all the rich knowledge and experience that my co-workers hold which I will take forward in future productions.

It was a superb opportunity to meet people and network and Gone to Ground couldn’t have been a better film to start my journey on. Working with people that have been in a similar position like myself and having such a wise Director that was willing to share his wisdom like a mentor was great and I’m very thankful for that.

In 2018, I was shadow Camera Op on the One Show for the BBC where the Director kindly showed me the camera equipment and his crew taught me how a live Television set works. However, Gone to Ground was the first onset film experience I gained, apart from University productions, they do not compare because of the different atmosphere; working with professionals and working on somebody else time. It’s a different type of pressure, something that can’t be recreated in an educational atmosphere.

From Gone to Ground I moved on to Sweet Heart a film in the Jurassic coast where I was a production Runner/Driver which was interesting seeing a film from the production side of things.  I also managed to get experience and help out on set when I could by cable bashing, traveling cards to on site editor and even organising a Low Loader to come to set. The experience of working closely with ADs and the Producers taught me a few things on how the crew are managed and how to manage time, but only solidified my ambition to become a crew member and not part of production but it’s good to know how other departments operate.

I want to be part of the camera crew. I always have, being so close to an Arri Alexa Mini and a Sony Venice at points just makes me want to use them one day soon.

I have learnt a lot of film terminology and how to deploy equipment properly, the importance of timing and collaboration on set to make everything run as smoothly as possible. I have also learnt you have to think quickly on your feet as you are always against the clock. It is also important to know what equipment you are using it may take a while for that to happen, so make it clear to the crew, the level you are at with equipment and your knowledge to save time.

I have improved by using my voice on set, in the first days I might have shied away from speaking up but for example, if you see something that could be a danger or ruin a take for example an extension reel that hasn’t been fully unreeled and the camera man is running down the road following actors and a monitor is about to fall shout stop the team would rather you ruined a take than an expensive piece of kit that could delay the film much longer than another take.

Listen to what people are saying, show enthusiasm put yourself out there and don’t be afraid to try things, as a student, people aren’t expecting us to know it all even though we would like to show it. You will make mistakes and you never stop learning. Respect everyone as you should and work hard don’t rest until the people in charge say stop. Be friendly stay calm and try speaking to everyone.

Learn onset etiquette, ask questions to the appropriate people if you show interest to learn most likely people will teach you.