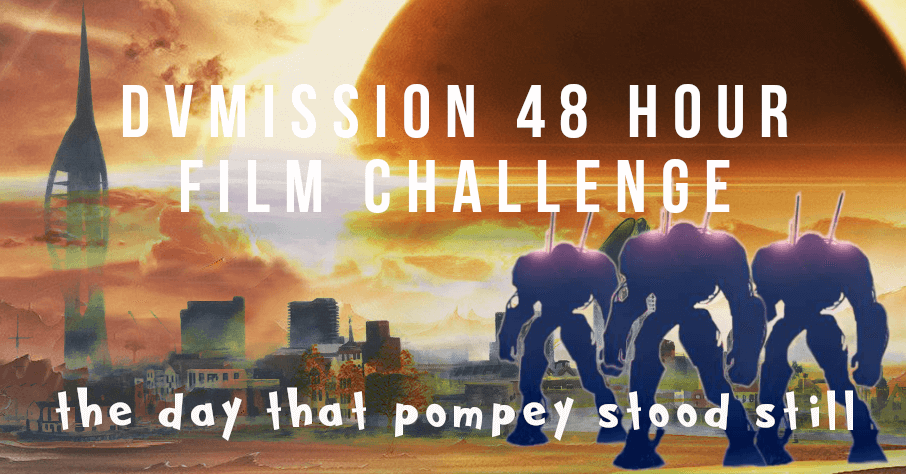 In less than three weeks time DVMISSION 48 Hour Film Challenge launches the 14th edition of its annual filmmaking competition. To take part you just need to sign up and be ready for the ‘obstructions’ at 5pm on Friday 28th February. Then you have 48 hours to make a short film!

Not as easy as you think and many have fallen over the weekend as they try to write, shoot and edit a 2-minute film over one weekend. There again, some have managed to pull it together at the very last minute. One year, back in the day before we did this all online, a team crossed the finish line by actually handing us a laptop and a hard drive that was still rendering.

Not only is it good fun, but it is a great way to hone your filmmaking skills. If you don’t believe us here is what one of our long-time challengers has to say about DVMISSION:

“As a filmmaker I think it’s really good practice and I learn a lot each time I take part. The

community is great and it’s a very nice celebration of filmmaking. DVMISSION is like the best film school in the world. It has taught me so much about the practice of filmmaking and has contributed to a lot of my knowledge. The experience I have gained has secured me work professionally and I consider DVMISSION to have directly contributed to that success”.

Ben first took part when he was just 14 and came back every year through school, college and university. He set up his own 48 Hour film challenge before scooting off to London to work at the BBC.

So, the message is clear – do DVMISSION = get a job at the BBC!

Plus of course there is the glittering gala screening and awards night where we dispose of the much-coveted Pompey Oscars. These handmade awards, tailored to the theme of each challenge are given out not just for good filmmaking not for making our judges laugh, cry out or cringe with delight. It’s also an opportunity to ‘be part of the story’ as we transform our venue, The Wedgewood Rooms in Portsmouth, into an immersive cinema experience.

In 2017 we staged DA DA LAND and asked the audience to imagine what it would have been like if David Lynch directed La La Land then we threw them into an imaginary world of Lynchian characters.

In 2018 we created FROM DUSK TILL DAWN OF THE DEAD and asked the audience to imagine how it would be if George A. Romero had teamed up with Quentin Tarantino and then we created that storyworld.

In 2019 we took the audience into the murky world of downtown 1960’s Tokyo for POMPEY DRIFTER, a noirish vision of the swinging sixties, for a night of high drama.

In 2020 we have another cinematic treat for you – THE DAY THAT POMPEY STOOD STILL is a sci-fi extravaganza to kick off the new decade. Expect entertainment, short films, lavish decor.

Enter #DVMISSION20 with the promo code EXPO2020 before the 21st February and there are 10 discounted team registrations available (30% off the registration fee).

The challenge weekend of the 14th edition of this year’s 48 Hour Film Challenge is over the weekend of 28th Feb-1st Mar.