DVMISSION rolls out the 14th edition of its long running 48-hour film challenge. 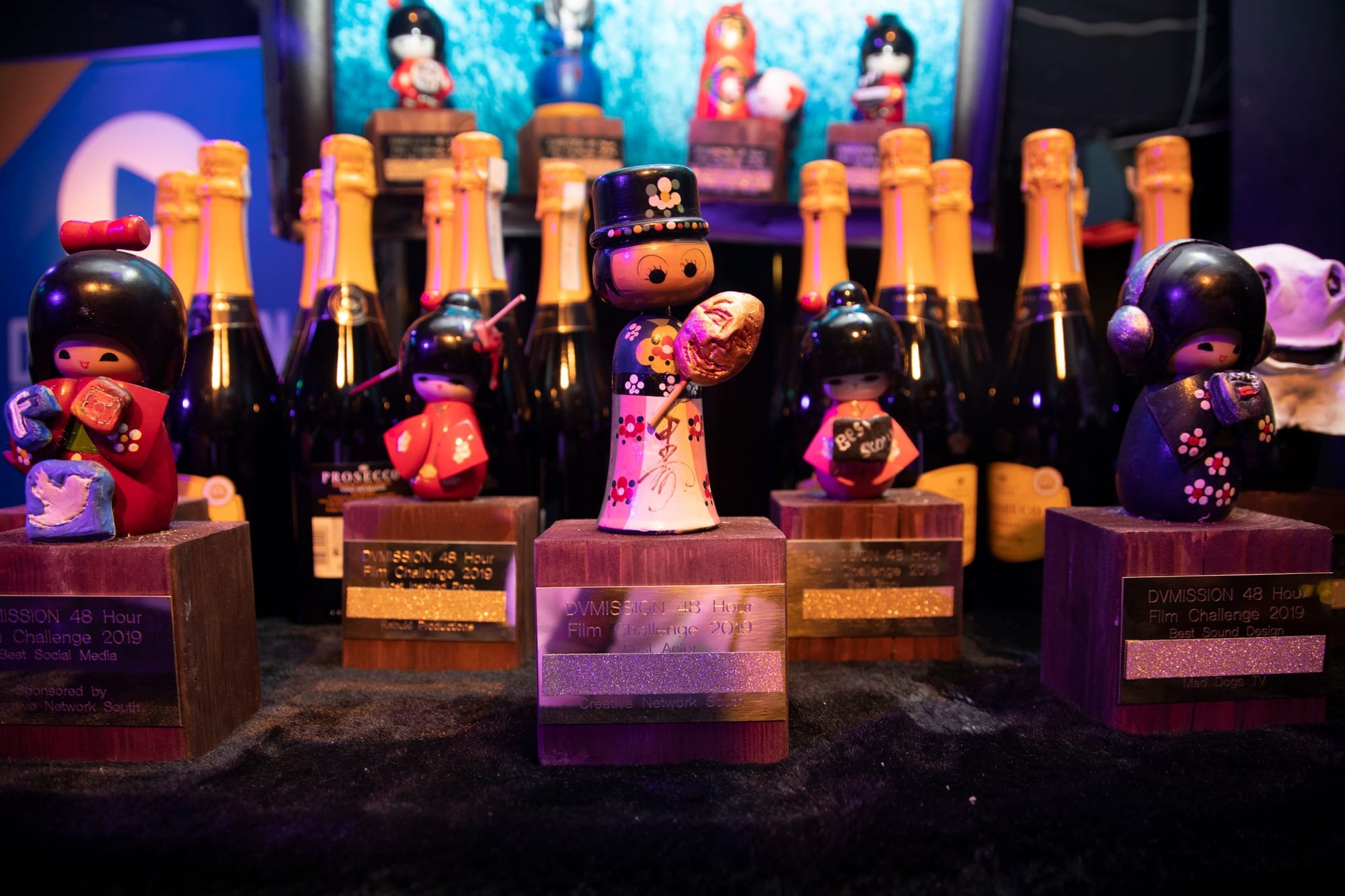 Awards hand crafted by: Lawn of the Dead

DVMISSION is a film festival with a difference in that you make the films in 48 hours over the preceding weekend. This year the challenge weekend is 5pm Friday 28th Feb to 5pm Sunday 1st March 2020. The following Saturday night DVMISSION holds a glittering gala screening and awards ceremony where winning teams are presented with their POMPEY OSCARS. It’s an opportunity to dress up and do a bit of networking, plus of course this is all followed by the infamous DVMISSION after party.

The competition has been running since 2006 and we reckon the challenge participators have made over 300 films since it started. Most of these are online and can be viewed on our Youtube Channel (LINK: https://www.youtube.com/dvmission) along with highlights videos of many of the most recent events.

The gala night is also an immersive cinema experience, which if you don’t already know, means we bring the films alive by creating a theatrical experience for the screening and prize giving.

In 2017 we staged DA DA LAND and asked the audience to imagine what it would have looked like if David Lynch directed La La Land and threw the audience into an imaginary world of Lynchian characters.

In 2018 we created a new storyworld for FROM DUSK TILL DAWN OF THE DEAD (LINK: https://youtu.be/hHJIL_zx-VY) that asked the audience to imagine the outcome of a collaboration between George A. Romero and Quentin Tarantino.

In 2019 we took the audience into the murky world of downtown 1960’s Tokyo for POMPEY DRIFTER (LINK: https://youtu.be/2t-xEy_4t1M ), a noirish vision of the swinging sixties.

In 2020 we have another cinematic treat for you – THE DAY THAT POMPEY STOOD STILL, a sci-fi extravaganza with no expense spared.

The idea for a 48-hour film challenge originally came from DIY filmmaker, Johnnie Oddball. Frustrated with the difficulty of making short films, in he dreamed up the idea of a 48-hour challenge offering: "If you can turn up on Friday to pick a title and a theme out of a film can, and use them to make a film within 48 hours, you can return two weeks later to watch your film on the big screen". In 2003 he then went on to create one of the biggest filmmaking events in British history with a national 48-hour film challenge in which over 1 0,000 people participated, producing 488 short films. In 2004 he organised another four filmmaking events around Europe and the first 24-hour film challenge at Cannes in 2005.

Inspired by Johnny Oddball’s adventures in filmmaking the DVMISSION founders Jinx Prowse and Roy Hanney, came up with the idea to run a 48-hour film challenge in Portsmouth. In 2005 they ran the first event with just 12 teams competing. In 2019 the event saw 30 teams take part though not all of them crossed the finish line – yes its tough, it’s a challenge after all.

It has been called ‘rock-n-roll filmmaking’, it’s known as the ‘Sex Pistols meets the Oscars’ and it has become an important feature in the annual calendar for local professional, amateur and student filmmakers. The gala night screening, at which the coveted ‘Pompey Oscars’ are awarded to the best films, is a unique event and one at which you will find the many of the regions audio-visual creatives in attendance.

Now the longest continually running 48 Hour Film Challenge in the UK, the 2020 edition of #DVMISSION20 is already open to team registrations and all you need to do is get along to our FILMFREEWAY (LINK: https://filmfreeway.com/DVMISSION20) site and sign up.

To watch a short documentary explaining DVMISSION to the uninitiated go here (the video was made in 2009 and is hopefully being updated for 2020): (LINK: https://youtu.be/FeTCvv5ARp4)