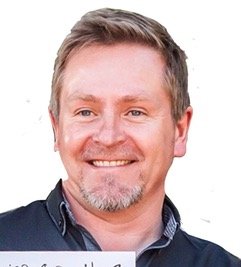 Born in Romford, Essex, Paul moved to Christchurch with his parents in 1976, where he still lives today with his wife, Tess, three children, two cats and the family dog.

Paul studied Graphic Design Bournemouth Arts University where he specialised in illustration and discovered a love of caricature art. Paul found his passion for cartoon work at an early age, as soon as he was old enough to hold a pencil!

After college, Paul found himself in the sign and display industry and later ran his own sign business, SignCity. During this time, he also continued to accept commissions for caricature portraits and small illustration jobs.

Paul soon realised his future lay in full time caricature/illustration work and closed SignCity in 2007 and has since performed caricatures ‘live’ at quite a range of events across Southern England.

A large percentage of Paul’s work is for weddings, drawing “quick fire” caricatures to

entertain. Corporate functions and promotions also account for a lot of his work and the remainder would be private parties, shows and festivals.

Sometimes his work adventures takes him in new and interesting directions! In 2017 he worked with a Bournemouth-based agency to create white board animations for GSK. He has also appeared on Channel 4 television demonstrating caricatures and also enjoys illustrating children books and is busy writing and illustrating his first children’s short story with his wife, Tess.

His work at shows and festivals is growing and he has also worked with the BBC.

In between Paul’s appearances, he accepts commissions to paint full colour, themed caricature portraits from photographs.